Belgian Folk Band Skratt Mixes It All Up With DPA Microphones

The range of clip mounts available for d:vote™ Instrument Microphones makes it easy for Skratt to amplify unusual instruments like bagpipes and the hurdy-gurdy.

After experimenting with a number of different microphones, Belgian folk group Skratt has opted for DPA’s d:vote™ Instrument Microphones to capture the sound of a variety of unusual instruments, including accordion, bagpipes and nyckelharpa.

All seven members of the band have very different musical backgrounds covering a diverse range of styles, from heavy metal and pop to folk and classical. This allows their music to branch out from traditional folk and incorporate influences from all over the world and many different genres.

Skratt founder Mathias Van de Vliet says it was the search for a microphone that could truly capture the sound of an accordion that led the band to DPA. 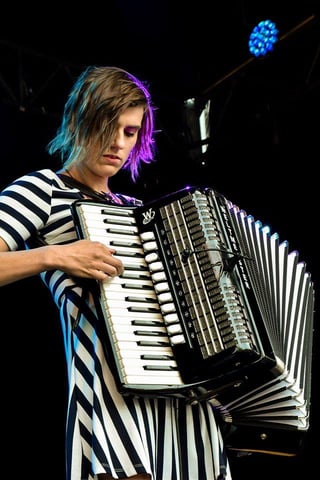 “To begin with we tried other microphones but they sounded thin and were terrible on monitoring. We just could not hear the accordion,” he explains. “We also tried a condenser mic on a stand for the violin, but that wasn’t practical.”

“The clip mounts are great because they are made for a different kinds of instrument shapes, so they fit really well,” Van de Vliet says. “They are super versatile and that’s what I like most. You can use them on just about every instrument because they are so well thought out. With a bit of creativity, you can even fit the clip mounts to instruments they were not originally designed for – for example, I use the piano clips on the accordion with some small metal plates and the guitar clip on the nyckelharpa. The clip for wind instruments can be used for bagpipe or on drum cymbals and so on. They really are a blessing for bands like ours that use some strange instruments.”

Van de Vliet adds that sound quality was another important factor in the band’s decision to switch to DPA.

“The d:vote™ 4099s sound incredibly natural and clear and we get very little feedback compared to other microphones we have tried – even when we are using them on stage with very loud monitoring,” he says.

Alongside his live work with Skratt, Van de Vliet is also an instrument maker. He studied plucked instrument making at the International Lutherie School Antwerp and then went on to learn about instrument restoration.

“Mostly I make guitars, but I have also made drums and I recently started to make a hurdy-gurdy and a nyckelharpa. It is a passion of mine, from choosing the perfect wood in Italy until I finish the instrument with numerous layers of French polish. It is a long process because I always want to improve the instruments.”

Van de Vliet’s d:vote™ 4099 Instrument Microphones are occasionally used to create sound clips of the instruments he is making, so that he can check the audio quality.

“The d:dicate™ 4011 microphone would be a better choice for real measurements but unfortunately I don’t own one of those,” he says. “But when it comes to amplification, my d:vote™ is always nearby because no pickup can beat its audio quality, practicality or price point.”

Although not signed to a label, Skratt recently released its first CD, which was recorded in Van de Vliet’s living room with a very basic 8-channel set-up.

“I’ve always been interested in ancient instruments and I get inspiration from the diversity of musical instruments on show at the Musical Instrument Museum (MIM) in Brussels,” he says. “The instruments people play today are developed to perfection but they are just a small part of the story. I am also interested in the rough diamonds – the imperfect instruments and the unusual sounds they create.

“As a band, we are inspired by these instruments and we like to take unusual instruments and mix them into our songs. This allows us to play with different sounds and fit them together so that our music has its own twist. Hurdy-gurdy, glockenspiel, accordion, bagpipe, bouzouki, drums and a samba-whistle in one song, the sky is the limit!” 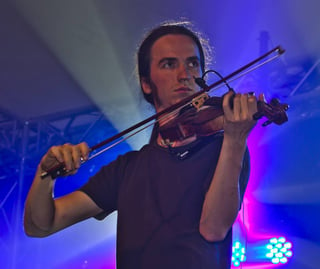