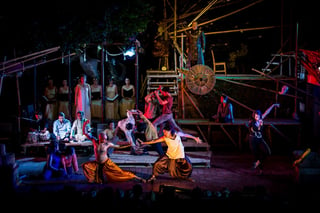 When Lucy Peckham, co-partner of Anchorage-based Both Ears Live Sound, was contacted by Greg Mitchell, a design professor at UC Santa Barbara, she knew she would be a part of something special. Mitchell was looking for a sound engineer to go to Nepal to work on the first opera ever performed in that country. Peckham recognised early that she would also need equipment capable of performing under Kathmandu’s less than forgiving environment. Peckham found the solution she needed in DPA Microphone’ d:screet™ 4061 Necklace Microphone.

After attending a presentation by DPA representatives at the USITT conference in 2016, Peckham was convinced DPA was the microphone she needed for the challenging Nepal opera project she was about to undertake. “At the conference, I decided I wanted to use three d:screet™ 4061 Necklace microphones for the singers and a d:screet™ IMK-SC4061 Instrument Microphone Kit with a d:screet™ 4061 Omnidirectional Microphone for the saxophone,” adds Peckham.

The opera, Arjuna’s Dilemma, by American Composer Douglas J. Cuomo, is based on a story from the Hindu holy text, the Bhagavad Gita. It was to be staged outdoors in the world heritage site Patan Durbar Square near the end of the rainy season.

Because of the outdoor venue, an extremely small orchestra (with only nine musicians) and the varied vocal strengths of the company, all the singers and the orchestra needed to be miked, amplified and mixed. Peckham chose DPA microphones for the opera singers, Roy Stevens and Annalisa Winberg, the Hindu Temple singer Gurudev Kamat and the jazz saxophonist Inap Shrestha.

“I used d:screet™ 4061s for this project because of the quality of the sound they reproduce,” says Peckham. “Though the whole opera was amplified and mixed, it had to sound as if it wasn’t. It had to sound naturally acoustic, as opera should, and thanks to DPA, it did. The accuracy and transparency of sound reproduction without distortion, and the significant feedback rejections, are absolutely amazing.”

On one particular night, Peckham was thrown a curve ball when a large street festival was set up on the other side of the wall of the outdoor venue. “As part of the festival, there were multiple drummers, instruments and several amplified vocalists,” adds Peckham. “With the conductor’s, composer’s and director’s permission, that single night I raised the overall volume of the show significantly to drown out the distraction of the street festival. Arjuna’s Dilemma became a rock opera that night! There was no feedback at all and though the opera singers were amused, no one’s performance suffered either. The quality of their vocal amplification was completely unchanged and they were still comfortable with the sound.”

In addition to the d:screet™ 4061s unrivaled sound quality, Peckham also likes the microphones’ rugged build and compact form factor. “The comfort of the d:screet™ 4061s necklace-style is excellent for performers who aren’t used to being miked,” adds Peckham. “In no time, they forget they are wearing them. In addition, they were also perfect for the hot, humid environment where we were performing. The d:screet™ 4061 Necklace Microphone has no issues with sweat to my knowledge. The opera sounded amazing and it was wonderful to be part of such a ground-breaking production.”