Steve Smith is more than just a drummer for legendary rock band Journey. His skills in playing the percussion for the band are equally as impressive as FOH engineer Keith “Meaux” Windhorst’s in capturing the crispness of sound of each drum, cymbal and chime on stage. Windhorst, a veteran FOH engineer, employs a series of DPA microphones to overcome the implications of having several contrasting instruments on stage.

Although Meaux has spent over 35 years in the business, his decision to switch to DPA is a relatively new one. “We finished touring in August of last year and during our break, Gabriel Antonini from DPA approached Steve about the possibility of using DPA mics,” says Meaux. “I knew of DPA’s reputation from industry friends, but I was fine with the drum sound we already had so I hadn’t thought about changing microphones on Steve’s drum kit. Gabriel sent me a box of mics which I agreed to try out when we had time. One afternoon we we pulled the mics off the kit and replaced them with the DPA mics. Steve played and I recorded and when we listened back, they sounded really good. I thought they were a step up and the rest is history.” 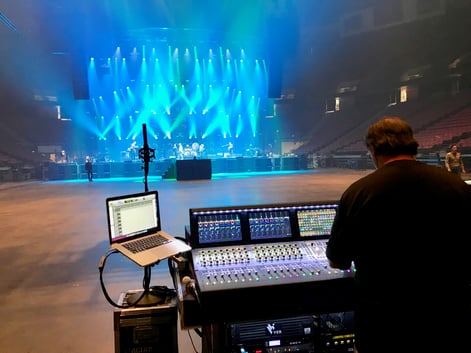 Six d:vote 4099 Instrument Microphones are used for the toms and a d:dicate 2011 Twin Diaphragm Cardioid Microphone on each of the three snare drums and base snare.

“We have a lot of mics in a very tight space,” adds Meaux. “Our drum kit is on a 10-foot riser and when you go into big arenas, you deal with different reflections and different sounds. As far as the mics go, the d:vote 4099s and d:dicate 2011Cs sound great and are isolating. For example, sometimes you need a specific mic to hear a specific drum while four other drums are within a three-foot proximity, and the DPA mics are really able to isolate that one drum sound.”

Meaux says the DPA mics embody the notion that “what goes in, comes out” where other companies tend to built a predetermined EQ curve into the element of the microphone, somewhat manipulating the sound. He has realized that you don’t have to gain DPA mics up wide to achieve the level you want. “It’s just very natural,” says Meaux. “They are a good representation of proper audio. My ear for standard EQ is quite consistent. If you boost the frequency on it or if you cut the frequency with these mics, they’re very reactive to that specific EQ pattern.”

In addition to the pristine sound Meaux gets from the drums themselves, he admits the design “I love the DPA hardware,” says Meaux. “I like how easy it is to conform the hardware to each drum and that it is not visually distracting.”

In the process of switching over the drum mics to DPA, Antonini also sent Meaux a d:fine™ 4088 Directional Headset Microphone for keyboard player Jonathan Cain. “The previous headset we had on Jonathan sounded okay, but it was big and bulky,” adds Meaux. “It was kind of an eye sore and Jonathan didn’t like the way it felt on him. We tried the d:fine 4088 mic during rehearsals in a studio and it sounded great. It was less intrusive for him, but I didn’t want to completely sign off on that until we had a chance to try it out in an arena. When you get into an arena you have all those speakers in the air, and reflections from the big room. I wanted to make sure that the mic was going to get me the gain that I needed and sound correct without any feedback. It passed the test! It looked great, sounded great and it was comfortable for Jonathan to wear, which is all you can ask for in a microphone.”

Journey’s 58-city co-headlining North American tour with Def Leppard wraps up on October 7 at the Forum in Los Angeles.